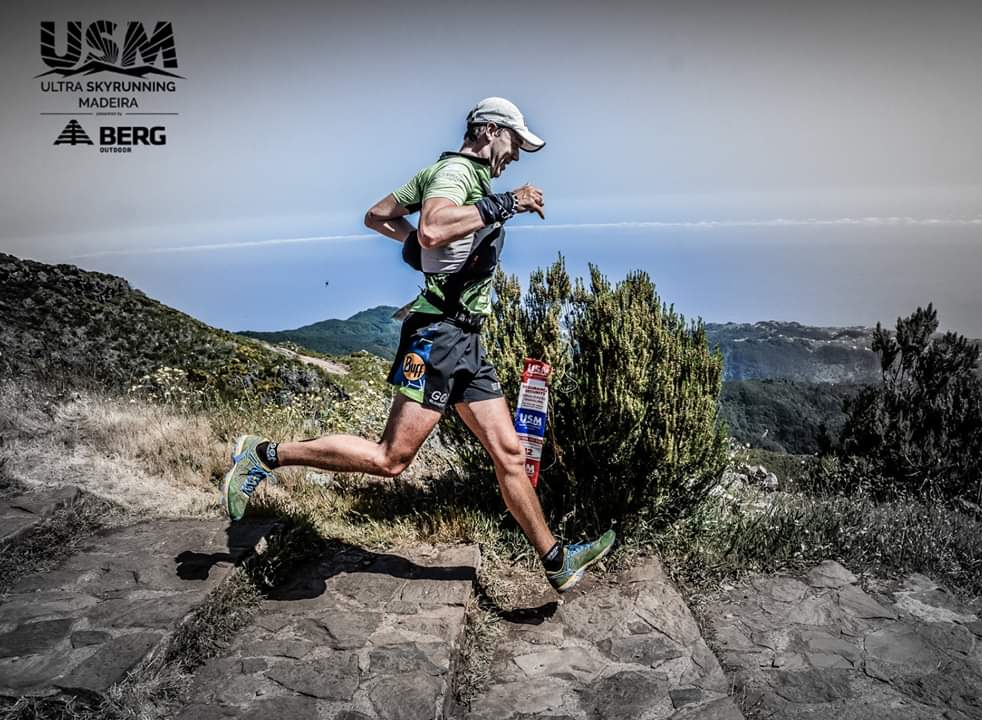 Firstly, I would like to congratulate the organisation and volunteers that put the race weekend together.  It was a wonderful event held on an incredibly beautiful island.  I think every runner that took part in the event will think the same and have good memories of Madeira.  I, for sure, will return.

My team mate and I arrived at the meeting point in plenty of time and took the second coach up to the drop off.  As the coach wound its way slowly up the mountain roads, I suddenly felt a great deal of trepidation with the task I was about to undertake.

We got off the coach and then had to hike for a good 20 minutes uphill before reaching the starting tents.  I then had 90 minutes to wait before it was my turn as each competitor goes off at 1-minute intervals.  I have never done a VKM before and decided to not go maximum effort knowing I was racing the following day; I wanted to enjoy the experience but still be competitive and had a sub-60 minute target in mind.

Each kilometre was harder than the last.  I completed 2km in 17 minutes so was inside my target, then the gradient got steeper, the humidity was increasing, and I was power walking as best I could.  By 3km, I had passed a few slower runners and caught the guy who starter directly ahead of me.  Then I could hear the footsteps of someone behind and a Frenchman, Yoann Caillot, came steaming past me with poles and flew off into the distance, amazing.  He finished 3rd in a time of 43mins!  KM3 to KM4 was tough but we were coming out of the trees and there was even a couple of short, downhills.   I could hear voices shouting somewhere above giving encouragement to the runners. I ran across a ridge and took a quick glimpse either side of me at these deep green valleys on both sides. Last push.  I hit the intersection up to the peak and heard the finish before I saw it, a vertical wall of rock and grass stood in my way.  I started the final ascent, heard the commentator shout my name then heard another runner closing fast.  I let him pass so as not to inhibit him on this narrow section and we both shouted “Força” at each other.  Using hands as well as feet to reach the rockface then pulling myself up with the chains to reach the summit and cross the line.  Exhausted, unable to talk, sweat dripping off me but fulfilment realised and a huge smile as I look around and take it all in.  Finish time = 0:54:52 and 36 out of 97 runners.

Another beautiful day, another race day.  My target was under 3 hours and to reach the top of the first climb (8km – Achada do Teixeira) in a fairly good position.  After the first kilometre of everyone hustling, I set myself into a good rhythm of attacking the climb.  The legs felt good and I was passing a lot of runners, including all but one teammate (Tiago) but the temperature was going up and up.  The climb didn’t seem to end and there were some really technical sections to climb.  I finally reached the treeline, running with the same young Portuguese guy that passed me at the end of the SVR and we pushed each other onward and upwards.

The summit was a welcome relief and took me 1h21mins to get there.  A quick refuel at the supply station and then we had a 5km technical downhill.  There was 3 of us together on the downhill, its was dry, dusty, gnarly and fast!  What a buzz!  Full focus, keep breathing, quick moving feet.  We caught a few more runners including Tiago but then I was trying to recover knowing there was a second climb to come.  Tiago pressed on and with another guy, but I was able to gap the young Portuguese and then found myself on my own.  The forest we were running through has been there for an age, and the water channels built long ago.  This place is a walkers and runners paradise.  Then I realise I’ve lost concentration and there are no markers ahead of me.  Damn, damn, damn.  I check the next corner and still nothing so turn around and head back along the trail telling another runner to follow me.  I see the turn and my team mate (Omar) that I had overtaken on the first climb has just got there before me and asks how much time I lost, I tell him about 45 secs…with him is the first female.  I keep pace with the first female but lose Omar.  Its one of those climbs where you can run up it if your legs had any energy left…so more power walking and keep pressing on.  I reach the final supplies and checkpoint in 2h27mins and know that its around 6km downhill to the finish.  I just go as fast as I can, losing the first female then going past another half dozen runners or so, I must be in the top 20 but I have no idea of position.

As I descend, I catch glimpses of Santana, the finish is getting closer.  I pass a few buildings and small holdings willing my legs to stay strong for the last few KMs.  I hit the outskirts and see a couple of runners on the other sides of a small valley, down and then back up.  I run the down slope and up the other side hard before looking back to see if anyone if behind me.  It’s the fight for 1st female with two ladies racing each other.  I reach the last corner and we have 100m uphill to the finish line, I check again and the English lady has beaten the Russian lady.  I make one final effort to ensure I am not overtaken and cross the line with my arms raised skywards.

I finish in 02:54:37, totally exhausted but satisfied that I gave it my all.  There is confusion as there are many runners already here, I’ve passed many of them yet they are already at the finish…?!  We wait for the rest of the team to come in then review the online timings.  I am currently showing in 23rd, Omar in 19th and Tiago in 4th.  We look more closely at the splits and its obvious that Tiago and many other runners missed the second climb out.  They did what I did and didn’t see the markers but carried along the trail.  The second climb rejoined the trail further along and added 2 KM to the run to make the full distance.  So while the runners of both the MSR and SSR filtered through the finish line we went and showered, changed, tasted some local beer and cake before checking the results again.  Results refreshed and there are many DQs including Tiago and Armando from our team but Omar is upto 9th and I am 12th overall plus we both made the age group podium in 2nd and 3rd respectively. Super chuffed!

The afternoon ends with the awards ceremony and then we head to a local restaurant to sample local dishes whilst watching the Champions League Final.  It was a great weekend and next time I come I will stay for longer to explore more of the island.